2013 - In Greek mythology, Tiresias was a blind prophet of Thebes, famous for clairvoyance and for being transformed into a woman for seven years. The performers are Annika Dörr and Thomas Mader. Thomas is, in real life, blind.

Tiresias is an interactive dance piece exploring ranges of dynamic in expressive gesture – from small discrete finger movements, medium sized "conversational" gestures, to large energetic swipes and explosive outbursts – and how these movements can be interpreted sonically. The piece plays on the theoretical work of composer Francois Bayle’s dealing with the phenomenology of listening dealing with acousmatic music – music without visual sound sources. While Bayle maps out modes of musical sound/play using movement metaphors like “rub”, “pull”, “push” or “slide”, we turn this around and instead map out movement modes using sound. The sounds palette of the piece is based on hundreds of prerecorded sound particles. The sound particles make up a rich amalgam of sound objects, differing greatly in quality and feel and the degree to which they invite concrete associations and narratives. They are played purely by the dancers' movements (no movement=no sound). A small discreet finger movement plays a single sample, but large gestures result in concatenations, building into chains and finally leading to dense clouds or roaring masses of sound. 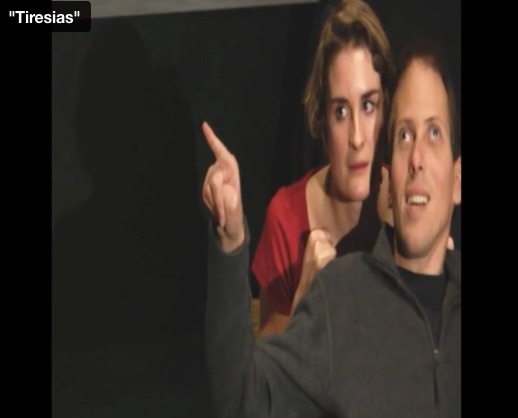